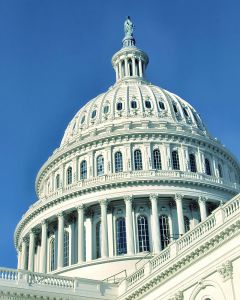 The First Amendment to the Constitution states, “Congress shall make no law respecting an establishment of religion, or prohibiting the free exercise thereof.” It was adopted to prevent the creation of a national church similar to the Church of England in Great Britain.

Interestingly there is no prohibition in the Constitution of official state churches. In fact, in the early days of the union, there were states that had state churches. One of these was Connecticut whose state religion was Congregationalist. Some Baptists in Danbury resented this, and wrote a letter to President Jefferson stating their objections. Jefferson wrote back agreeing with them, saying, he too favored a separation of church and state. This is from where the famous phrase came. It is not found in the Constitution.

The “separation of church and state” has been used so much by the ACLU, and other liberal groups, that many Americans believe it to be in the Constitution. These groups go much further than Thomas Jefferson, and claim this separation is not only the meaning of the first amendment, but that it actually dictates there shall be no religious displays on public property. In fact, I believe their real intention is to remove all religion from the public square.

Through the courts, the liberals have hijacked the First Amendment, turned it upside down, and made it mean the opposite of its original intent. To violate the First Amendment, Congress must make a law that establishes a national religion. How does a local school board, deciding to have a prayer before the start of school, have anything to do with Congress making a law establishing a religion? How do the Ten Commandments, displayed within a courthouse, involve Congress making a law? There is no connection between these actions and the First Amendment other than people freely exercising their religion.

The ACLU, the courts, and other liberal groups, under the guise of upholding the First Amendment, have actually removed our First Amendment right to freedom of religion. What they could not do through the people and Constitutional Amendments, they have done through court precedent.

There are two ways to stop this liberal encroachment on our rights. The first is to appoint judges who believe in returning us to the original intent of the framers. The second is civil disobedience. School districts should refuse to stop saying prayers, and courthouses should continue to display the Ten Commandments. We not only have a right but a duty to resist unjust laws. If we do not, we could one day find ourselves in a secularized society, in which religion is restricted to private churches and homes.

If you find this hard to believe, consider that the reason why liberals say we can’t pray in school, or display the Ten Commandments on courthouse lawns, is because both are being done on government property. All public sidewalks and parks are government property. According to liberal logic there should be no displays of religion within them. This is the ultimate goal of these groups. We can either stand against them or capitulate to them. It is our choice.