Part I: How We Got Here 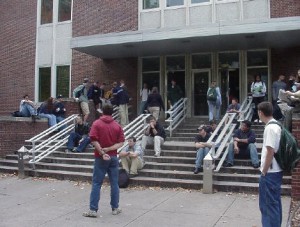 Here I am holed up in this safe house knowing that it won’t be long before I hit the streets one last time before being arrested. I won’t be engaging in what traditionally has been considered to be criminal behavior. I will be preaching on the streets and will most assuredly end up in jail. Before I do, though, I want to give a quick history of how we, a Christian country, ended up here.

It is obvious to most of us now that modern day liberalism has been anti-Christian from the beginning. I think we knew it at least somewhat all along, but we certainly never thought it would end up here. We lived in a bit of a fantasy world believing that they would or could go only so far. This was America after all. The place where freedom of speech and freedom of religion are cherished: the shining city on a hill. We thought we could never lose those freedoms. We didn’t even believe that liberals ultimately wanted us to lose them.

So we fell asleep. Even though we lost every battle of the culture war we still believed that in the end everything would be all right. Maybe we thought God would step in on our behalf, or maybe we watched too many Hollywood movies where the good guys always win. Whatever it was, we watched ourselves loose battle after battle, and yet we still believed we were a Christian country. After all didn’t all the polls say that most of us considered ourselves to be Christian? Never mind that our actions spoke differently, we took solace in those polls, and believed that when it came down to crunch time the people would rise up, and our Christianity would be restored.

It first really hit me when we lost the battle over homosexual marriages. For a while there it looked like we were going to win. We even had some minor victories, but in the end the liberals were more persistent and wanted it more. I knew at that point there was no longer any use in pretending that we were a Christian country. We couldn’t change at such a fundamental level and still believe that nothing had changed. The unbelievable thing was that many in the Christian community still referred to America as Christian. I couldn’t believe it. It was at that point that I knew we were in real trouble.

After that things really began to accelerate. The liberals knew that they had won the war, and they just had a few mop up battles to fight. I have to be honest I never really thought it would get to the point of us being arrested. I figured we would just be marginalized, and for a while that is what happened. In fact, many had so marginalized themselves over the years that they didn’t even realize a change had taken place. At first the liberals were happy with this state of affairs, but eventually those who just wouldn’t shut up began to get on their nerves, and they decided they needed to get rid of us.

That brings me to the reason why I am writing this. I am hoping if I can get this out it might serve as a wakeup call to some, and an encouragement to others, that they are doing the right thing in carrying on the resistance. The pressure is great both from the church and the society for us just to stay quiet and fade away, but we must not. We must carry on the fight even if it is to no avail. No avail, that is, in turning the country back to God. It is never to no avail witnessing to the faith. It is better to go down in a flame of glory preaching at the top of our lungs than to fade quietly away. Before I do just that though here are some of the reasons and events that got us where we are today. I hope and pray that someone is helped by it.