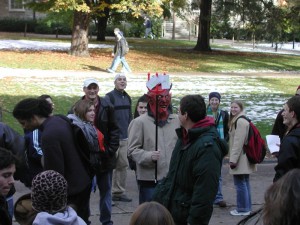 The media continually ran stories about how we needed to join the world community. So anything that divided us from the rest of the world must be put aside for the greater good.

Movies began to show the conquest of good over evil through national and world unity. Whole generations grew up with hero’s who fought for peace and unity. Through contrived polls, surveys, and continual harping, the media made it seem as if the masses were for this unity, when at least in the beginning they were not. This perception discouraged the majority and eventually wore them down. Popular T.V. shows consistently made fun of “divisive religions” and “truth mongers.”

Again, by continual harping, the media convinced the people that debate and argumentation were negative and harmful. Everyone was encouraged to keep their controversial ideas to themselves. We were told to live and let live. Anyone who spoke out was labeled as an intolerant bigot who was a threat to cultural harmony and peace. They were vilified until they became a pariah. The media continually ran stories about how people were traumatized by contentiousness, and pleaded with us to stop for the good of all. They even challenged our patriotism, claiming that we were putting our own interests above that of the whole.

They claimed that they were not fighting a war against religion but religious extremists. They so demonized us that when we were persecuted the people felt we got what we deserved.