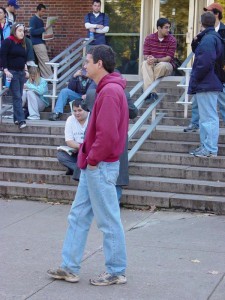 For a long time many of us put our trust in the politicians. We thought that they would never let things get to where they are today. We were fools to do so. When it comes down to it, if someone is not a Christian, no matter how conservative their politics, they will cut and run when the going gets tough, and that’s exactly what happened.

At some point people began to tire of the culture war, and when they did all they wanted was peace and unity. When the people no longer wanted a contentious climate, the politicians quickly followed suit. They are after all beholden to the people for their livelihood and power. Almost to a man, they began to call for national unity in order to fight our common enemies in the world. Of course, any religion, which threatened to disrupt this desire for social harmony, was labeled as destructive and fought against.

As I mentioned before, the real change came when homosexual marriages were made legal. We became a different society almost immediately. It was as if there was a spiritual change in the atmosphere. It was weird at first, as if there was a lull as everyone caught their collective breath, but then it seemed as if all Hell broke loose. Although many tried, in reality we could no longer even make the pretence of being a Christian society. It was as if at that moment God removed what remained of his hand of protection and blessing from us as a nation.

At the same time, the courts began to rule that since public sidewalks and parks were publicly owned, to preach about religion on them was a violation of the separation of Church and State. Bills were passed that outlawed any speech that condemned certain behaviors and groups as being hate speech and detrimental to national unity.

Controlled free speech began to be the political mantra. Conservatives, who traditionally championed the rule of law, had long ago come to believe that the law was what the courts said it was. So even they had to accept the new status quo.

It was considered to be acceptable for politicians to have a personal belief in God as long as it did not influence their political decisions. Eventually the courts ruled that it was a violation of the separation of Church and State for a politician to make political decisions based on his religion. As a result there were few openly religious politicians. Some would at times give lip service to God, but when they did it was always purposely generic and devoid of meaning.

There were some liberals who recognized that what was happening was religious persecution and were bothered by it. Any thoughts of standing against it, though, were silenced by their moral relativism, and their desire to be seen as progressive and enlightened. Conservative’s first loyalties were for a robust economy and a strong military. Everything else had to take a back seat. In the end, religion for them served a political purpose, and in times like these there were just too many issues that had greater political importance.

For most liberals, religious and moral dissenters were simply backwoods bigots who were filled with hate, and needed to be dealt with for the good of society. Conservatives had some sympathy for us, but they felt we were bringing too much division to the country during a time of international conflict and economic upheaval. They said they just wanted us to be quiet until things settled down a bit and were back under control. Try as they may, they couldn’t understand why we would not. This made them much less sympathetic to us, and behind closed doors many of them thought we were getting what we deserved.