Evidence for the Resurrection 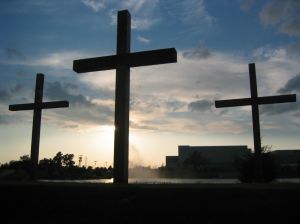 1. If Jesus did not rise from the dead then we as Christians would be fools, as we would be worshipping a dead guy:

A. If he did rise himself from the dead then he would be God as only God could do such a thing.

2. The disciples claimed that Jesus rose from the dead and spent 40 days with them before ascending into Heaven:

A. If they had claimed that after Jesus’ death they had been sitting around the campfire, and saw Jesus’ face in the flames smiling on them as if to say everything would be all right, then we could chalk it all up to a mass delusion.

B. When they said that after the resurrection he spent 40 days with them then that is either the truth or a lie. There is no middle ground.

3. If it were a lie what would have been the disciple’s motivation?

A. There is no evidence that they were doing all of this to get fame or fortune, as they neither tried nor obtained either in their lifetime.

B. They preached a messiah about whom their own people were not prepared to hear.

D. They were beaten, whipped, martyred etc. and yet none of them ever recanted.

E. How many people would dedicate their life to what they knew to be a lie, all the while being rejected by their own people, beaten, whipped, faced with death, never desiring nor obtaining fame or fortune, and yet never recanting.

4. Those who would deny the resurrection also have the problem of Paul:

A. Paul was a rising star in the Jewish religion. He was studying under Gamaliel, and called himself a Pharisee of the Pharisees.

B. He was so dedicated that he was actually going from city to city persecuting those Jews who believed in Christ.

C. All of a sudden he began to claim, that as he was on his way to Damascus Syria to persecute those who believed in Christ, Jesus appeared to him, and he was now a believer.

D. At that moment he lost everything. He not only lost his standing as a Pharisee in the Jewish community, but also as he started to preach Jesus the Jewish people rejected him.

E. He was beaten, whipped, chased from town to town and ultimately martyred, and yet he never recanted.

F. The question that must be answered is what would have been his motivation to lie about his experience with Jesus?

H. He must have been pretty confident to issue such a challenge.

5. Again, what those who reject the resurrection must explain is what would have been the motivation for the Disciples and Paul to act as they did. Especially considering the fact that they never desired nor obtained fame or fortune in their lifetime.

A. If one reads the New Testament one has to admit that the disciples fully believed that Jesus rose from the dead. The question is what prompted this belief?