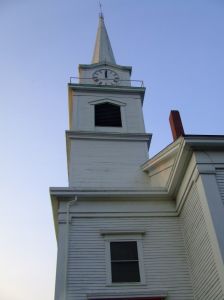 A. There is no proper authority to justify Protestantism.

B. The idea of sola scriptura (the scriptures alone) is not in the Bible, nor does it work in real life, as shown by the many denominations.

C. What really happens is that every individual Protestant becomes his own authority interpreting the scriptures, as he will.

D. Despite their good intentions this creates a relativistic, liberal Christianity.

E. As Orthodox we believe that the Church, as represented by the Apostles and Bishops, is the authority.

2. One example of the difference between the Orthodox and the Protestants is how liberals and conservatives view the Constitution:

A. Liberals tend to believe that the Constitution should be read in the light of modern society. They don’t care about a historical connection with the founders. They only care about what it means to them today.

B. Conservatives, on the other hand, look at the original intent of the framers and seek to stay true to it.

C. Protestants do not have a historical connection with the Apostles, and seek to understand the Bible as it strikes them today.

D. The Orthodox have a historical connection to the Apostles and seek to maintain that original understanding.

A. This is the idea that we are saved by faith alone.

B. It is also not in the Bible.

C. If taken seriously it allows us to do anything we want and still go Heaven.

D. It misses the idea that salvation is the process of becoming Christ like.

A. This is a misguided attempt at unity that states that there are some doctrines that are necessary for our salvation and some that are not.

B. Protestants only demand agreement on the few doctrines they call primary or essential.

C. These will tend to be ones such as the Trinity, incarnation, virgin birth, death and resurrection of Christ.

D. Doctrines such as baptism, communion, confession, free will, predestination etc. would be considered unnecessary to salvation and therefore okay to disagree upon.

E. This view is not scriptural and reveals a misunderstanding of salvation.

5. Most Protestants have a juridical view of salvation:

A. They got this from the Roman Catholics

B. It postulates a God who is angry with man because of sin, and who can only be appeased by killing his Son.

C. Salvation then is reduced to our believing in Jesus who has appeased the Father’s wrath through his death.

D. Once we have believed; then the Father’s wrath is removed and we are saved.

E. Notice how under this system our primary need is to be saved from God.

F. It is difficult to fully love a God from whom you need to be saved.

G. Contrast this to the Orthodox understanding that our need is to be saved from ourselves, and the Father sends Jesus because he loves us, not because he is angry with us.

6. Another problem with the Protestant understanding is that it divides the Trinity as the Father is angry and the Son is merciful:

A. This anger creates a need in God, as his wrath must be satisfied.

A. It has always been the Protestant way to go into the culture, find out what the people want and give it to them.

B. Martin Luther used bar tunes for many of his hymns.

C. The problem with rock and roll worship is that since it is basically party music it creates an atmosphere where Christianity is seen as a party religion.

D. People will always be more affected by the way in which they worship then by preaching.

E. Most people forget what was preached 10 minutes after they leave church, but the worship sticks with them.

F. Because of this party mentality virtually all asceticism is lost, and with it almost all understanding that salvation is the process of becoming Christ like.

G. The two are intimately tied together, and if you lose one you will normally lose the other.

H. They will therefore tend towards the prosperity gospel, which looks more towards being materially prosperous than it does becoming holy.

8. Another aspect of rock and roll worship is that the words tend to be shallow:

A. The beat of rock music doesn’t tend to allow for any sort of in depth theology or Church history.

B. It lends itself more to emotional love songs to Jesus.

C. So the average evangelical Protestant ends up being emotionally attached to Jesus, but knows little in the way of theology or Church history.

9. Protestants have done away with the sacraments and therefore all reason to go to church:

A. The only thing left in Protestant worship is singing, preaching, and fellowship.

B. One can get all of these outside of Church.

C. All one needs is some worship tapes, taped sermons, and some Christian friends.

D. The reason most Protestants go to Church is out of fear of going astray because of isolation from other Christians.