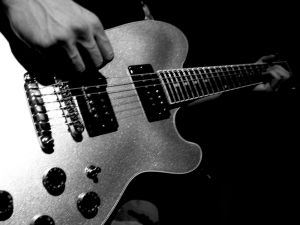 Rock and roll worship has dominated Evangelical Christianity for years, and is now seeping into the mainline Protestant denominations. Even the Roman Catholic Church has flirted with it over the years. Evangelicals reason that it draws young people into the church, and once they are there they can be preached to and helped. On the surface such reasoning sounds good, but dig down a bit and many problems arise.

Rock and roll is party music, and when it is brought into the church it creates an atmosphere that makes Christianity into a party religion. People will always be affected more by the way they worship than by what they hear being preached. Most of us forget a sermon ten minutes after we leave church, but the worship sticks with us.

Christianity is an ascetical religion filled with fasting, self-denial, picking up one’s cross, and following Christ. It is nearly impossible to show people through worship that Christianity is a party religion and then preach asceticism and self-denial. There will be a disconnect in people’s minds, and when push comes to shove, partying will tend to win out. Once asceticism and self-denial are lost, the idea that salvation is the process of becoming Christ like is not far behind. The two go hand in hand, and once one is lost the other will be too. What we tend to end up with is either a social gospel, which feeds the poor but lacks holiness, or the prosperity gospel, which is the American dream of physical wealth incorporated into Christianity.

Another troubling aspect of rock and roll worship is that it tends to be shallow. The beat of rock music does not lend itself to in-depth lyrics reflecting the Church’s theology and history. It lends itself much more to emotional love songs to Jesus. Since most people do not rush home and study the scriptures, the average Evangelical ends up being emotionally attached to Jesus, but knows little in the way of theology or Church history.

Because the worship tends to be very emotional people tend to confuse their emotions for the Spirit of God. Often times one can hear Evangelicals walking out of church conversing about how much they felt God during the service. I believe what is happening is they are confusing the emotions stirred by the music with the Spirit of God. This leaves the door wide open for the Devil to put thoughts in their minds interpreting their emotions in virtually any direction. Once a person associates an emotion with the Spirit of God, what happens when a tragedy occurs and they can no longer summon up that emotion? I think this is the main reason we need so many books telling us where God is when it hurts. Does anyone think the early Christians needed such books when they put their life on the line the moment they believed?

Although the original idea of luring young people into the Church through rock music may have been a noble one, the result has been to produce a confused, self-indulgent, theologically bereft people who have an emotional love for Jesus but not much else. To paraphrase Shakespeare, Evangelical rock and roll churches are filled with so much sound and fury, signifying little.