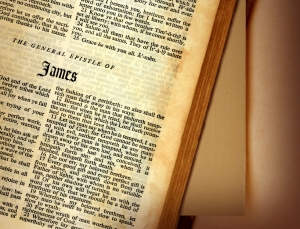 I think the main problem many Protestants have, is a misguided view of salvation. They tend to see salvation in a juridical sense. We have broken God’s law, and he demands a death to appease his sense of justice and wrath for our sin. Not wanting to destroy us, he is appeased through the death of his son. Since the law has been fulfilled, if we believe in Jesus and trust in his sacrifice, we will be declared not guilty before him, and therefore saved from his wrath and justice. Obviously there is no place for works. If salvation were a one-time belief in Jesus and repentance of sin, any works would be tantamount to making ourselves good enough for God, which would be ridiculous. Also, in this view, we are actually being saved from God. It is his wrath and justice from which we need to be saved. It can be difficult for Protestants to fully love a God from whom they need to be saved.

The Orthodox view is very different. We believe that God created Adam in his image with the ability to grow into his likeness. Adam sinned before he became like God, and therefore brought death and continued sin upon himself and all of mankind. Jesus came to restore the image of God in man, and once again make it possible to become God-like. As the fathers have said, “He became like us so we could become like him.” God became man so he could lay the old corrupt man in the grave and raise him up glorified and God-like. He did this because he loved us, and desired to save us from ourselves, not because he was angry or in need of justice. God has no needs. As a result, salvation is the process of taking a sinful, mortal, human being and making him God like and eternal. This is a lifelong process and requires both our faith and our works together with God’s grace to save us. Therefore faith and works go together to save man.

It is the idea of salvation by faith alone that allows Protestants to say there are some doctrines that are necessary for our salvation, and we must unify around them, and others that are not, and we can disagree about them. If salvation is limited to a one-time profession of faith and repentance of sins, then the only doctrines that are necessary to believe are those such as the Trinity, incarnation, virgin birth, and the death and resurrection of Christ. Most of the others are up for grabs. It makes one wonder why Jesus left us with so many unnecessary beliefs.

On the other hand, since Orthodoxy’s view of salvation is the lifelong struggle to become Christ like, all the understandings of Christianity are important and affect our salvation.

In conclusion, it is my opinion that the doctrine of Sola Fide is not scriptural and proceeds from a faulty view of God and salvation.